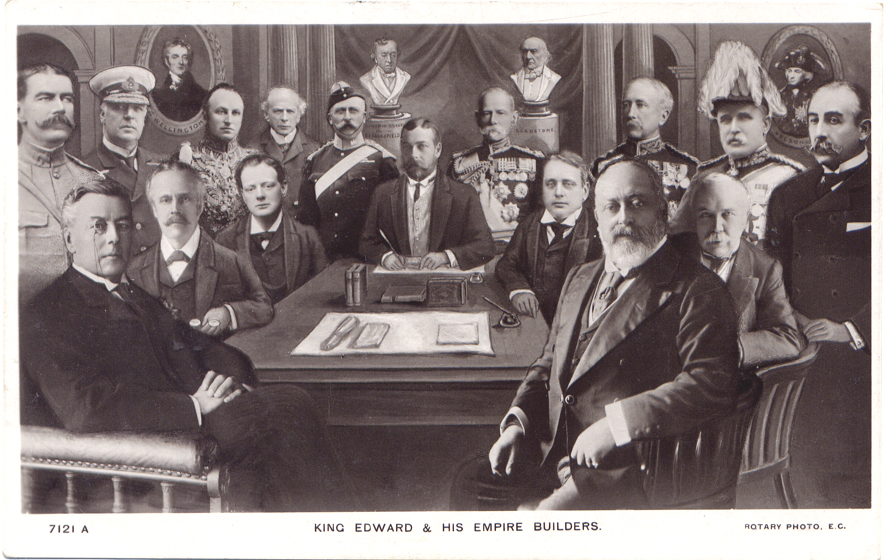 These two postcards really are a bit of magic, the Edwardian era’s photoshop. The Rotary Photographic Co., market leaders in the production of postcards of Royalty and celebrities, showed a touch of creativity in designing many of their cards, in particular taking individual portraits and montaging them in a printing blender to create an impressive panorama. On the two featured today, each person appears on a postcard of their own in the company’s range, but they have been woven together to create an image of a large gathering – which never happened!

Edward VII sits centre stage on both postcards. On the first, he appears with a group of politicians – spot David Lloyd George, Joseph Chamberlain and Winston Churchill – and military men, along with the Prince of Wales in an authoritative position. Gladstone and Disraeli’s busts give even more gravitas to the scene. This is an important statement of Great Britain’s position in the world.

The second postcard, A Royal Family Party, emphasises the enduring and networking nature of The Crown. Edward’s family appear with Spanish and Swedish Royalty (on this occasion the Kaiser, almost ubiquitous at British Royal family gatherings, doesn’t feature. Rotary have helpfully captioned the card so identification is simple. At the back, a painting of Queen Victoria and Prince Albert surveys the scene. This card, too, presents an important message of stability and hierarchy.

Now here’s a suggestion for a collector who wants a challenge. How about putting together all the individual cards of the people who appear on these postcards, along with the montages? That’d keep you out of mischief for a while!